In drosophila, there are two phases of myogenesis. The first occurs in the embryo to produce the larval musculature. The second initiates in larval life to produce the musculature of the adult fly, including leg muscles, during metamorphosis after histolysis of larval muscles.  Virtually nothing is known about the mechanisms governing Drosophila appendicular myogenesis. However, our previous work showed that the complexity and the multifibre organization of the Drosophila leg musculature are similar to that of vertebrate muscles, making the development of Drosophila leg muscles an attractive model (Soler et al. 2004).

A major finding of this work is that the specification of appendicular muscles is tightly linked to the formation of internal tendons, suggesting that tendon and muscle precursors (founder cells) interact during development to form the proper pattern of functional muscles.

In order, to better understand and characterize the molecular mechanisms involved in leg muscle and tendon development and in early interactions between precursors of those tissues, three main approaches are followed: 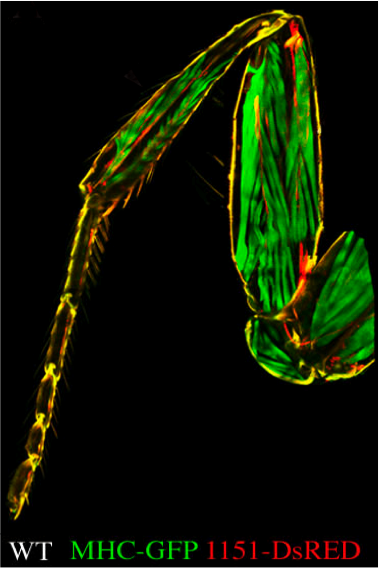